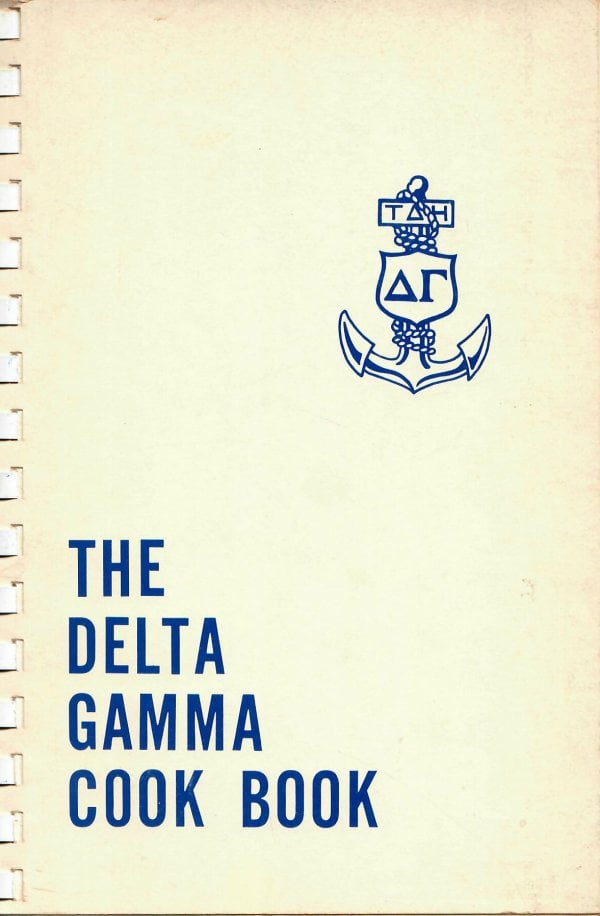 The Delta Gamma Cookbook was published in 1966 by the Delta Gamma Foundation.  Delta Gamma is a college sorority founded in Oxford, Mississippi in 1873 whose headquarters are now in Columbus, Ohio.  The 1966 cookbook is Delta Gamma’s first attempt at a cookbook since their 1922 cookbook – which is available in reprint.

The recipes contained in the cookbook were submitted by alumnae and selected on the basis of their uniqueness and variety in an attempt to represent each alumnae chapter. As with most promotional cookbooks whose recipes come from their membership, credit is given to each submitter in addition to their alumnae chapter. Proceeds from the sale of the cookbook supported “all of the worthy programs of the Delta Gamma Foundation.”  The price of the cookbook in 1966 was $3.00 per copy postpaid.

Here are a few recipes from the cookbook –

Beat egg yolks with 1/2 cup sugar and add pumpkin and seasonings and milk. Cook over low heat until thick. Add gelatin soaked in water and stir until dissolved. Cool. When beginning to thicken, add the egg whites beaten until stiff with 1/2 cup sugar. Pour into a baked pie shell and chill.

This recipe is unusual in that it is equally good on fresh fruit salad, tossed salad or seafood salad. This is an old family recipe at one time sold commercially in Wisconsin.